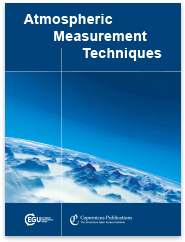 In this paper, we present a comprehensive comparison of more than 70 000 synchronous 1 min aerosol optical depth (AOD) data from three Global Atmosphere Watch precision-filter radiometers (GAW-PFR), traceable to the World AOD reference, and 15 Aerosol Robotic Network Cimel radiometers (AERONET-Cimel), calibrated individually with the Langley plot technique, was performed for four common or “near” wavelengths, 380, 440, 500 and 870 nm, in the period 2005–2015. This work has been performed in the frame of the WMO CIMO Izaña test bed for aerosols and water vapour remote-sensing instruments funded by AEMET, together with the Physikalisch-Meteorologisches Observatorium Davos, World Radiation Center (PMOD-WRC) (Davos, Switzerland), the Finnish Meteorological Institute (Helsinki, Finland), the Atmospheric Optics Group, Valladolid University (Valladolid, Spain) and Cimel Electronique (Paris, France).

The goal of this study is to assess whether, despite the marked technical differences between both networks (AERONET, GAW-PFR) and the number of instruments used, their long-term AOD data are comparable and consistent. The percentage of data meeting the World Meteorological Organization (WMO) traceability requirements (95 % of the AOD differences of an instrument compared to the WMO standards lie within specific limits) is >92 % at 380 nm, >95 % at 440 nm and 500 nm, and 98 % at 870 nm (Figure 1), with the results being quite similar for both AERONET version 2 (V2) and version 3 (V3). 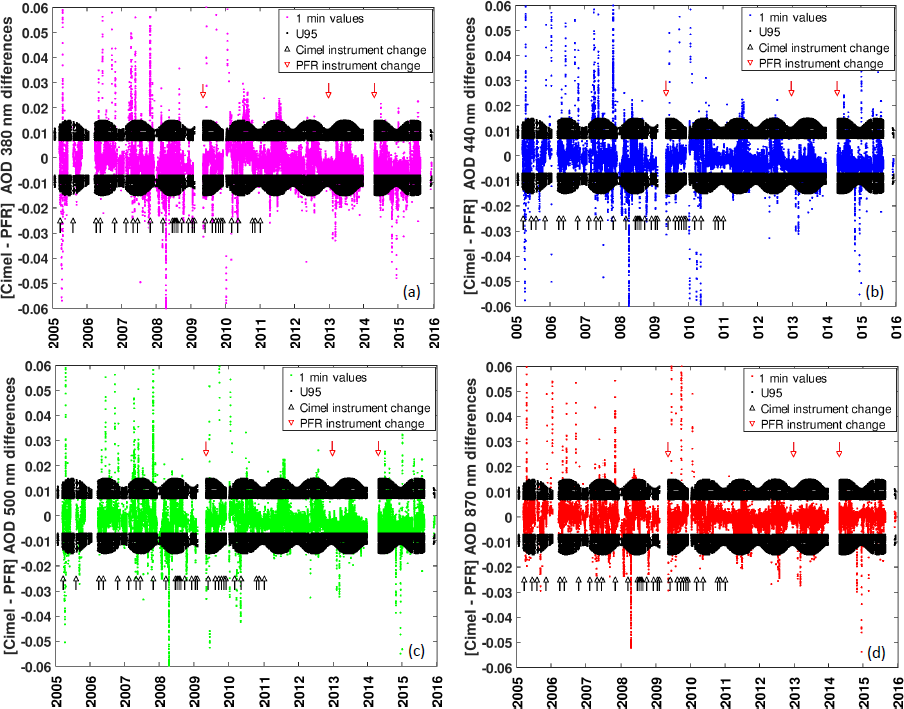 For the data outside these limits, the contribution of calibration and differences in the calculation of the optical depth contribution due to Rayleigh scattering and O3 and NO2 absorption have a negligible impact. For AOD >0.1, a small but non-negligible percentage (∼1.9 %) of the AOD data outside the WMO limits at 380 nm can be partly assigned to the impact of dust aerosol forward scattering on the AOD calculation due to the different field of view of the instruments (Table 1). Due to this effect the GAW-PFR provides AOD values, which are ∼3 % lower at 380 nm and ∼2 % lower at 500 nm compared with AERONET-Cimel.

This long-term comparison shows an excellent traceability of AERONET-Cimel AOD with the World AOD reference at 440, 500 and 870 nm channels and a fairly good agreement at 380 nm, although AOD should be improved in the UV range.

Although the results of the intercomparison between the instruments used by the two most important radiometric networks globally for AOD measurements show an excellent agreement, in this study a great effort has been made to understand the causes of the differences in AOD. To this end, a detailed analysis of almost all the instrumental and methodological factors that may explain the differences in the AOD determination by these two radiometers has been carried out. Therefore, this study constitutes a comprehensive paper review on the AOD measurements with solar radiometry.

For more details about this work, refer to: