How to act in the event of volcanic air pollution:“Action guide for high levels of volcanic pollution” from the IARC.

On 19 September 2021, an eruptive process began at Cumbre Vieja area, on La Palma (The Canary Islands). During the almost three months that the volcanic eruption lasted, in addition to the direct impact on air quality at La Palma Island, several episodes of high levels of volcanic pollution were recorded at the Izaña Observatory (IZO, 2370 m a.s.l.), managed by Izaña Atmospheric Research Center (IARC), AEMET, located on Tenerife Island, at about 140 km from La Palma volcano (figure 1). 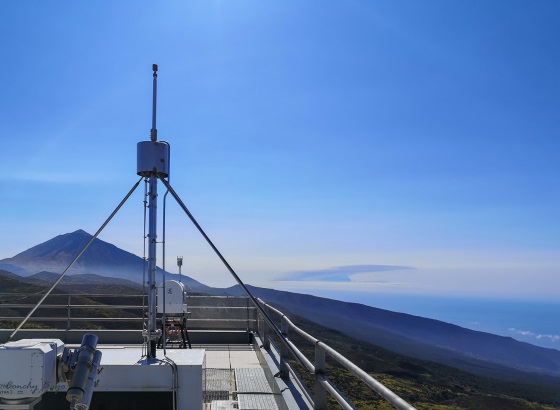 Figure 1.- View of the La Palma volcanic plume from the IZO tower  (on the horizon to the right of Teide), on 3 November 2021. In the foreground, the air intake for SO2 measurement. At the base of volcano Teide you can see a layer of volcanic air pollution that reached the Observatory that day. (Photo: C. Bayo)

The injection of gases and particles into the atmosphere constitutes one of the main dangers associated with volcanic activity, affecting air quality and, therefore, human health. The volcanic plume is dispersed in the predominant wind direction of the atmospheric layer in which it has been injected, being able to affect sites far away from the source of emission in a very significant way (figure 2). 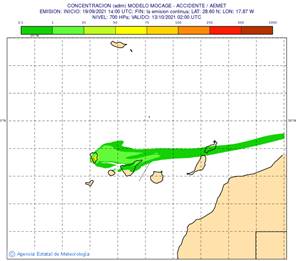 Figure 2.- Output of the AEMET operational model, MOCAGE (in accident mode), which shows the expected evolution of the plume generated by the La Palma volcano, for the early hours of 10/13/2021, at the 700hPa level (approximate IZO altitude).

Due to the transport of the volcanic plume injected into the lower-middle layers of the troposphere during the eruption, the levels of sulphur dioxide (SO2) measured at IZO were sometimes higher than the values measured at the air quality stations located at  La Palma Island, a few kilometers from the volcano. Natural pollution levels were higher than the pollution thresholds established by the European air quality directives (EC, 2008) and in the WHO (World Health Organization) Air Quality Guidelines (WHO, 2021) (figure 3). 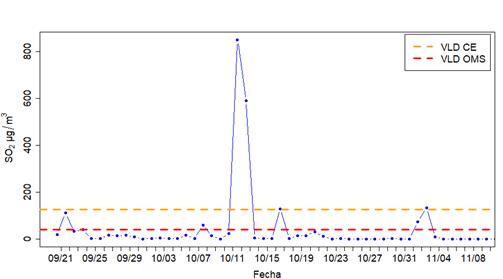 Given the first episode of very high levels of volcanic SO2 recorded at IZO, IARC established an internal procedure aimed at minimizing the health risks associated with the presence of volcanic pollution. As part of the operating procedure, an alert system with a web interface was developed, which facilitated real-time monitoring of SO2 concentrations (figure 4). The alert system was based on the information collected in international guidelines, published by Health Departments and by International Volcanic Risk Networks of regions where exposure to the volcanic pollution is much more common, such as Hawaii or Iceland, and in the thresholds established by the European Commission (EC, 2008) and the WHO (WHO, 2021). 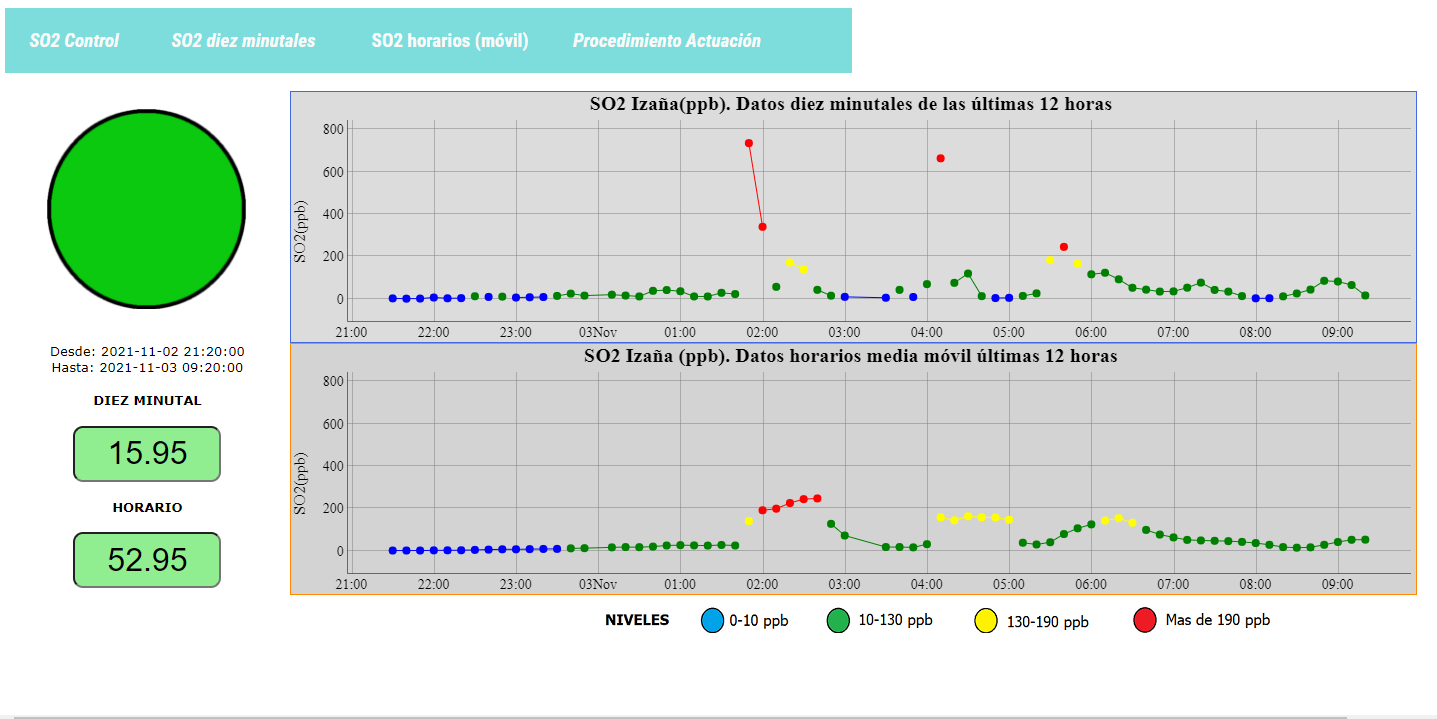 Figure 4.- Alert system for high levels of volcanic pollution at IZO, applied between 11/02/2021 (21h) and 11/03/2021 (09h). Upper graph, ten-minute mean concentrations of SO2; lower graph, hourly concentrations of SO2. The “circle” indicates, through a colour code, the alert phase in which IZO is in accordance to the SO2 concentration; phase that has its specific actions to follow.

From this emergency IZO procedure, an “Action guide for high levels of volcanic pollution. Izaña Atmospheric Observatory” has been elaborated and published by AEMET (Prats et al., 2022) (figure 5), whose objective is to present the bases for the establishment of control and prevention procedures aimed to mitigate the impact of exposure to volcanic air pollution on health. The guide compiles information from other international guides, prepared for other regions, and provides a reasoned explanation of the thresholds and recommended actions to follow in these situations. So, this guide aspires to be the basis of similar procedures to be developed for other areas when affected by volcanic pollution in the future. 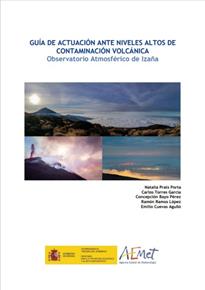 The guide can be downloaded at: