International day for the preservation of the ozone layer 2021

September 16 is the International Day for the Preservation of the Ozone Layer, in celebration of the anniversary of the signing of the Montreal Protocol in 1987 which agreed to control Substances that Deplete the Ozone Layer (ODS).

This year’s theme, “Montreal Protocol Keeping us, our food and vaccines cool”, aims to highlight the benefits of this agreement that has not only helped to stop the depletion of the ozone layer but also helps to fight climate change and contributes to increasing energy efficiency in the refrigeration sector, promoting food safety. The United Nations Environment Programme (UNEP) reminds us that, under the Kigali Amendment to the Protocol, countries have pledged to gradually reduce hydrofluorocarbons (HFCs), powerful greenhouse gases used as refrigerants. When fully implemented, the Kigali Amendment may prevent the planet from warming 0.4 degrees Celsius this century. (1)

The ozone hole in 2020 was one of the largest on record, with an average extension of 23.5 million square kilometres and a minimum concentration of 94 Dobson Units. It was also the longest lasting, with low ozone values persisting until December although these values normally recover at the end of October. This has led to the highest ever values of UV irradiance registered in the Antarctic Peninsula since records have been kept (Figure 1). Aerosols from the extensive bushfires that ravaged Australia during the months of December 2019 and January 2020 may be behind the Antarctic hole lasting so long. These bushfires generated large pyrocumulus clouds (PyroCb) that injected smoke and other gases into the stratosphere, causing it to heat up over a period of six months. This injection, together with solar warming, caused the generation of synoptic-scale vortices that persisted for 3 months, reaching 35 km. This disturbance greatly favoured the depletion of ozone, registering losses of 50 DU in the air masses affected.

Figure 1: Global map of ultraviolet index, during the month of December 2020 the highest ever values of UV irradiance were registered, with values in the Antarctic peninsula close to those registered at the equator.

Ozone values in the Arctic during the spring of 2020 were also among the lowest recorded, concentrations of 220 Dobson Units were recorded over 5 weeks between March and April 2020, well below values registered in the years 1997 and 2011. Unusually cold conditions and a powerful polar vortex in the Arctic stratosphere have caused this record decrease in Arctic ozone.

On the other hand, two articles published in Nature in February 2011 show that the undeclared emissions of CFC-11 (one of the main ODS) that had been detected in Southeast Asia have stopped abruptly, possibly due to their rapid detection and subsequent alert (2,6,7). According to these studies, its effect on the recovery of the ozone layer will fortunately be limited.

The latest reports published on the evolution of the ozone layer (WMO / UNEP 2018) indicate that the ozone layer is recovering, with a positive trend in the upper stratosphere observed, due to the success of the Montreal treaty that has reduced levels of SDO (Substances that deplete the ozone layer). However, its future evolution will depend on how climate change evolves and their mutual interaction (3). This makes prediction much more complex and necessitates the maintenance and improvement of our ability to observe the atmosphere, particularly when taking into account the record-breaking ozone depletions in both the Arctic and Antarctic.

The Izaña Atmospheric Research Centre (CIAI) is one of the reference measurement stations in the world, collecting the most precise measurements of ozone with a variety of instrumental techniques: Brewer, Ozonosondes, DOAS and FTIR, the latter in cooperation with the National Institute of Aerospace Technology (INTA) and with the Institute for Meteorology and Climate Research (IMK, Germany). These measurements belong to the Global Atmospheric Watch (GAW) programme of the World Meteorological Organization (WMO) and to the network of excellence “Network for the Detection of Atmospheric Composition Change” (NDACC). It also houses the Regional Ozone Calibration Centre (RBCC-E) of the Brewer Spectrophotometer Network in Europe. Since 2011, the RBCC-E has transferred its own calibration, obtained through absolute calibrations, to the rest of the network in regular campaigns co-financed by the European Space Agency (ESA), such as that recently held in Huelva. The CIAI is also the ozone calibration centre for the PANDORA spectrophotometer network (https://www.pandonia-global-network.org) funded by space agencies ESA and NASA. This equipment also provides NO2, SO2 and AOD measurements which are used in satellite validation.

The CIAI directs and manages the EUBREWNET (European Brewer Network), a global ozone observation network developed during the European action COST-ES120. EUBREWNET, which began in 2014 as a European project, today encompasses more than 70 instruments installed on five continents. This network allows the reception, centralised processing and distribution of ozone observations in real time and is recognized as a reference network by the Copernicus programme and served as an example during the last meeting of the UNEP expert committee.

To maintain ozone measurements, the Brewer Regional Spectrophotometer Calibration Centre for Europe and Africa of the World Meteorological Organization (WMO) operated by the CIAI, organised, with the Atmospheric Research and Instrumentation Area (AIIA) of the National Institute of Aerospace Technology (INTA), the XVI International Campaign for the calibration and intercomparison of instruments for the measurement of total ozone and ultraviolet solar radiation which was held at the INTA Atmospheric Survey Station in El Arenosillo (Huelva). This campaign has been carried out on a biennial basis since 1999, and at this edition in 2021, it is once again carried out according to the planned schedule, but with lower participation and fewer activities due to the restrictions imposed by the recent pandemic we have been going through. In this edition, some 25 scientists and 15 Brewer spectroradiometers participated, compared to the 50 scientists and 25 instruments that were more common in previous editions. 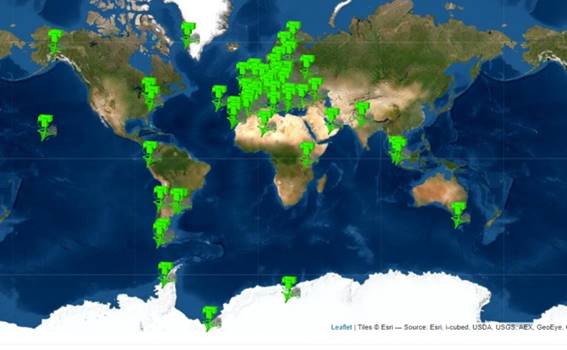 (*) This note is based on that of the International Ozone Commission, of which the author is a member, to be released on September 16.