We have recently read an unfortunate headline (1) disassociating the evolution of ozone and climate change. There is, however, evidence to the contrary. This southern spring the Antarctic ozone hole has shown itself in full force, reaching its annual maximum with one of the largest ozone deficits in recent years (2). This situation again affects inhabited areas of Tierra del Fuego. The intensity of the event varies from year to year and, so, the 2019 Antarctic ozone hole was one of the smallest recorded since 1990. Since the beginning of the 80s in the last century this hole has appeared at the end of August due to the high levels of ODS (ozone hole depressants, including the well-known CFCs). The Montreal Protocol has been a success and these substances are decreasing, improving the evolution of the event, but their concentration is high enough to maintain the destruction of the ozone layer during the Antarctic spring. The improvement observed last year is due to the meteorological conditions of the Antarctic polar stratosphere, much more active than normal, which caused the ozone hole of the shortest duration since records began (3). 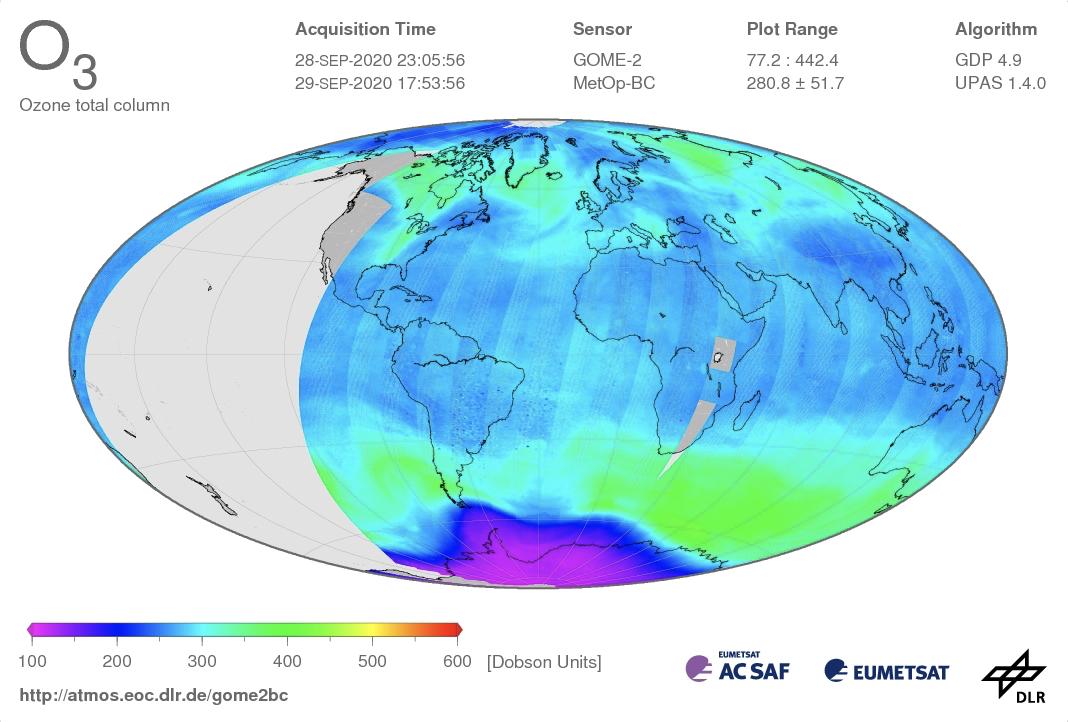 The ozone hole (in purple tones) as observed by the European GOME satellite, affecting the cities of Ushuaia (Argentina) and Punta Arenas (Chile).

In contrast, in 2020 we are seeing record depletion of the ozone layer in the Arctic, which is generally much lower than the Antarctic. This decrease is mainly due to weather. During spring, the stratospheric circulation was particularly weak. This circulation carries ozone-rich air in a similar way to meteorological systems in the lower atmosphere. The absence of these systems resulted in an unusual polar vortex during winter. The air in the vortex was isolated and, as its temperature was very low, conditions favoured ozone destruction reactions due to ODS, causing the largest Arctic ozone hole on record. As we saw in a similar event in 2011, the Arctic hole affects the ozone layer globally by increasing ultraviolet radiation (UV), registering increases in the UV index in Europe and Canada that reached 60% in the Canadian Arctic (4).

The latest reports published on the evolution of the ozone layer – Ozone Assessment WMO/ UNEP 2018 (5), LOTUS-SPARC 2019 (6) – indicate that ODS levels have continued to decrease over the last 20 years, and that the ozone layer is recovering, with a positive trend observed in the upper stratosphere since 2010. It is estimated that this recovery will not culminate until the year 2050 due to the long life of the substances that destroy it in the atmosphere. But this recovery trend is at risk (7). Concentrations of CFC11, one of the main ODS, are increasing due to uncontrolled emissions in Southeast Asia (8, 9), to which other ODS emissions not regulated in the Montreal Treaty must be added. As a result of global warming, the emission of both naturally occurring ODS and the concentrations of nitrous oxide (N2O) and methane (CH4), factors that affect the recovery of the ozone layer, are increasing.

As the facts show, evolution of the ozone layer is closely linked to climate change. On the one hand, the ozone hole has caused a change in the climate of the southern hemisphere, altering, among other things, the pattern of rainfall in the region. On the other hand, climate change is altering the global distribution of the ozone layer, which will entail a recovery of the ozone layer with concentrations higher than those prior to the onset of its destruction in high latitudes, with lower ozone concentrations in the tropics. As far as health is concerned, an excess of ozone is detrimental as it blocks the production of vitamin D.

Our ability to follow these events in the ozone layer depends on our observation network for this gas. Maintaining these observations is of vital importance to understanding the interactions between ozone and climate change, the recovery of the ozone layer and anything that may affect it in the future. The Montreal Treaty expert committee will hold a monographic meeting this week to expand the monitoring network with the aim of more effectively detecting ODS emissions and preventing future uncontrolled emissions such as those that took place in China (10).

Researcher at the Izaña Atmospheric Center (AEMET), responsible for the Ozone Calibration Center and the EuBrewnet ozone observation network.

Member of the International Ozone Commission.

Member of the Steering Committee of the Network for the detection of atmospheric Composition Change, (NDACC)

Other figures available at publisher’s criteria and cillary information: 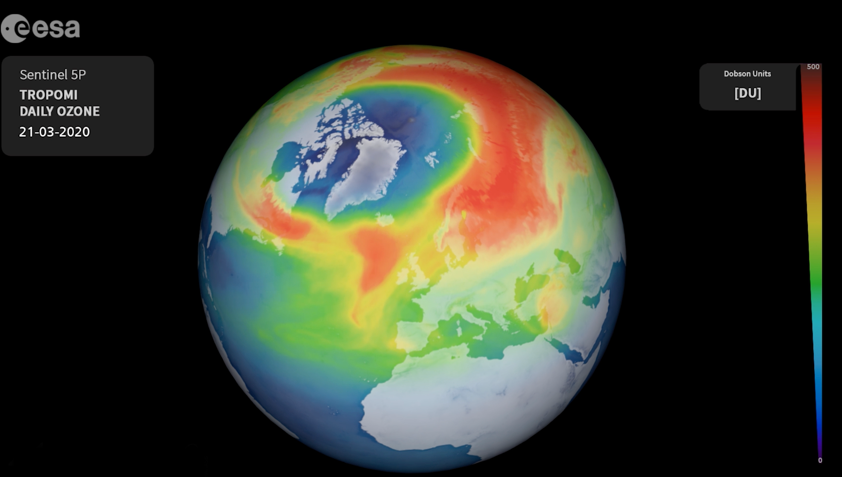 Ozone hole over the Arctic during the year 2020 observed by the TROPOMI instrument on board the Sentinel 5P satellite. 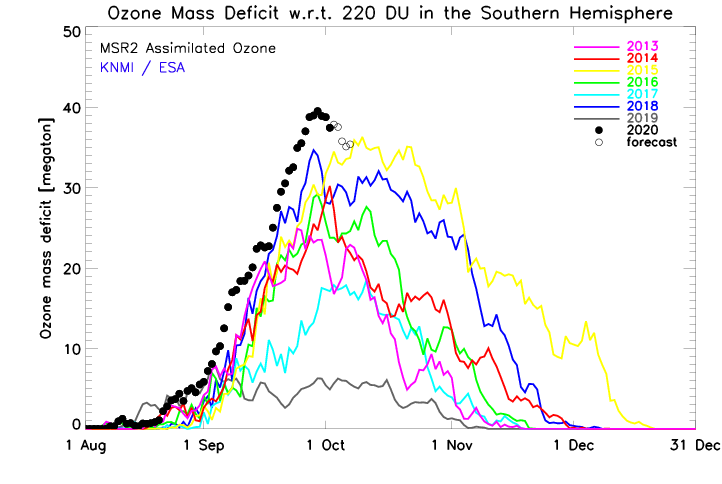 Ozone deficit since 2013 for the ozone hole over Antarctica. The dots show the values for this year’s event.

Copernicus Twitter announcing the end of the Arctic hole event

Video: from the European Space Agency.