Synergy between surface and column measurements at Izaña Global Atmospheric Watch station: application to the volcanic eruption on La Palma.

After a week of intense seismic activity and ground deformation, on September 19, 2021, a volcanic eruption began on Cumbre Vieja, in Cabeza de Vaca, El Paso on the island of La Palma. (Canary Islands, Spain) [1]. This volcanic eruption, which ended on December 15, 2021, was characterised by combining explosive phases, during which mainly ash and pyroclasts were ejected, with effusive phases, when large volumes of gases were released and were injected directly into the middle layers of the troposphere.

Figure 1. Images captured by the MODIS sensor aboard NASA’s Terra satellite, where the spread of the plume over the Canary archipelago is observed (the red dot indicates the location of the volcano) (https://worldview.earthdata.nasa.gov/). The upper image, corresponding to November 19, shows the impact of the plume on the island of Tenerife, where associated gaseous concentrations were detected at Izaña Observatory. In the lower image, corresponding to October 9, it is observed that the plume does not affect Tenerife, but was monitored with remote sensing instruments based on Fourier transform infrared spectroscopy (FTIR), which only require that the plume be in the direct path between the Sun and the instrument. For both days, the vertical profile of aerosols present from sea level in Tenerife (Lidar station) is shown, and it can be seen that the volcanic plume is detected at the same height as Izaña Observatory. MBL stands for maritime mixed layer and FT stands for free troposphere.

Atmospheric circulation in the lower and middle layers caused clouds of ash and volcanic gases to disperse over the Canary archipelago and the Atlantic Ocean, as shown in the diagram in Figure 1. This allowed the Global Atmospheric Watch (GAW) station at Izaña (IZO), located on the island of Tenerife at 2.4 km a.s.l. and at a distance of 140 km from the volcano, to record the direct impact of the volcanic dispersion cloud causing the concentrations of gases measured to exceed, by several orders of magnitude, the values of these gases under usual background conditions at this observatory [2]. 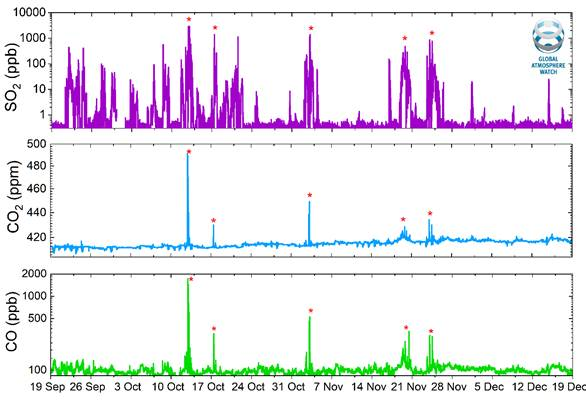 Figure 2. Time series of surface concentrations of SO2, CO2 and CO recorded at Izaña Observatory between September 19 and December 19, 2021 within the framework of the GAW-World Meteorological Organization (WMO) program. Concentrations measured are displayed on a logarithmic scale for better visualization. The events selected to study the relationship between recorded concentrations are indicated with an asterisk (*) (see explanation in text).

During these events, surface concentrations of sulphur dioxide (SO2), one of the main tracers of volcanic emissions [3], frequently exceeded 1000 ppb (Figure 2), with background concentrations below 1 ppb. Simultaneously, these episodes were accompanied by significant increases in other secondary gases emitted, such as carbon dioxide (CO2) and carbon monoxide (CO). The most intense event was recorded on October 12 with a duration of 8 hours, during which even the detection range of the SO2 analyser, set at 3000 ppb, was exceeded. In the same episode, CO2 reached a concentration of 490 ppm (i.e., an increase of 80 ppm with respect to the seasonal value) and CO increased to 1,600 ppb (i.e., an increase of 1,500 ppb with respect to the seasonal value). In general, the events recorded lasted several hours and occurred mainly at night, because during that part of the day the subsidence circulation is favoured from the middle and upper levels of the atmosphere, typical of subtropical zones, which pulls the volcanic dispersion cloud toward the observatory (Figure 1). After the episodes, concentrations of these gases recover their background conditions (SO2) or their seasonal trend (CO2 and CO).

Analysis of the relationships between the different concentrations observed may allow the eruptive process itself to be characterised and its different phases evaluated. Thus, Figure 3 represents the temporal evolution of the relative variations of increases in CO2 and SO2, as well as in CO and SO2, for the episodes identified in Figure 2. A gradual decrease in the proportion of SO2 is observed, suggesting a change in trend or phase of the eruptive process at the beginning of November. This result is consistent with observations made by various NASA satellites, which show a reduction in SO2 emissions starting in November (https://so2.gsfc.nasa.gov/), coinciding with a decrease in the height of temperature inversion associated with the trade wind regime (recorded by radiosondes), which confines the plume to low levels, altering its mixing and diffusion in the atmosphere (results not shown here). Although this is a preliminary result, everything seems to suggest that it was possible to monitor, in a timely manner, the decrease in volcanic activity on La Palma from Izaña Observatory, located 140 km from the volcanic eruption. 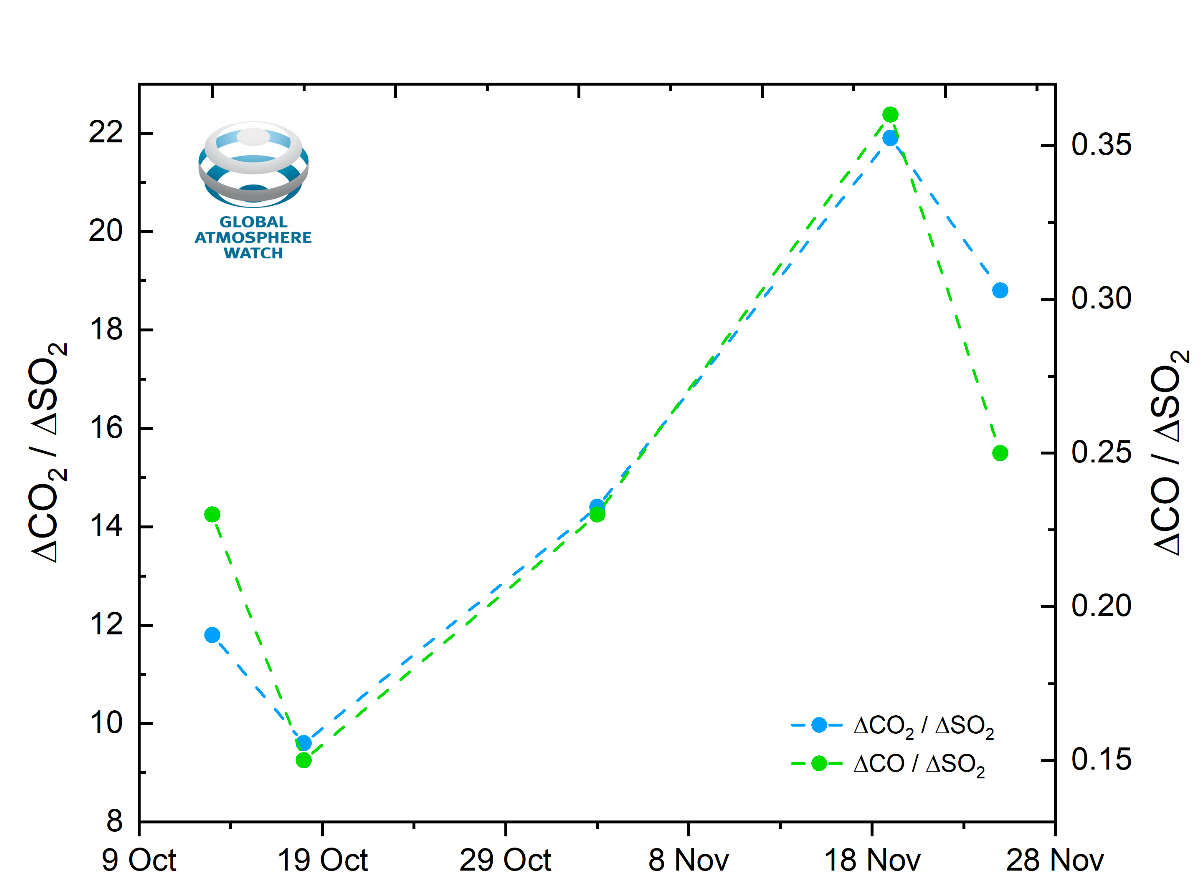 Figure 3. Time evolution of the relationship between the variations of CO2 and CO concentrations with respect to that of SO2.

In addition to belonging to the GAW-WMO program since 1984, the IZO station, managed by Izaña Atmospheric Research Centre (IARC, State Meteorological Agency of Spain, AEMET), runs a complex, complete observation programme for monitoring and researching atmospheric gaseous composition [2]. Among these contributions, the measurement program based on Fourier transform infrared (FTIR) spectrometry stands out, which is developed within the framework of international networks NDACC (Network for the Detection of Atmospheric Composition Change), TCCON (Total Carbon Column Observation Network) and COCCON (Collaborative Carbon Column Observing Network) [4].

Figure 4 shows the total concentrations in the atmospheric column of SO2, CO2 and CO between September 24 and October 6, 2021, obtained from two FTIR spectrometers, the IFS 120/5HR and the EM27/SUN belonging to NDACC and COCCON, respectively. Most days these gases undergo variations in concentration that are typical of their daily cycle. However, on September 24 and 28 and October 3, alterations in their evolution are clearly identified, with the observed increases associated with the volcanic dispersion cloud. Particularly noteworthy is the increase in SO2 concentrations, ranging from almost zero values to over 100 ppb in the total atmospheric column. Note that FTIR spectrometers measure solar absorption spectra, thus recording the absorption footprint of gases present throughout the atmospheric column, unlike the in-situ analysers operated in the GAW-WMO program, which record concentrations at surface level. Both measurement techniques, useful in the characterisation of the gaseous composition of the volcanic plume, will only give values simultaneously at a station if there is a direct impact of the plume on the station. When this scenario does not occur, only the FTIR technique can monitor the gas concentration of the volcanic plume, which may even be found tens of kilometres from the vertical of the observatory, with background conditions for SO2 in situ and concentrations of CO2 and CO in-situ registered at the observatory typical of their seasonal trend (Figure 1).

Parallel to the IZO measurement program, on September 20, 2021, the IARC-AEMET coordinated the deployment of scientific instrumentation on La Palma with the aim of monitoring the eruptive process in detail. In addition to instrumentation dedicated to measuring the height of the volcanic dispersion cloud and characterization of aerosols emitted being deployed in the context of European infrastructure ACTRIS (Aerosol, Clouds and Trace Gases Research Infrastructure) [5], another COCCON EM27/SUN FTIR spectrometer, allowing improved monitoring of the volcano’s emissions based on their trajectory, was installed in the south of the island, in the municipality of Fuencaliente. As can be seen in Figure 4, in the case of La Palma, the impacts of volcanic emissions are clearly recorded on October 2 and 3, when the volcanic plume drifted south of the island. On these days, the values in the total atmospheric column increase by 2 ppm for CO2 and 25 ppb for CO with respect to their respective daily oscillations. 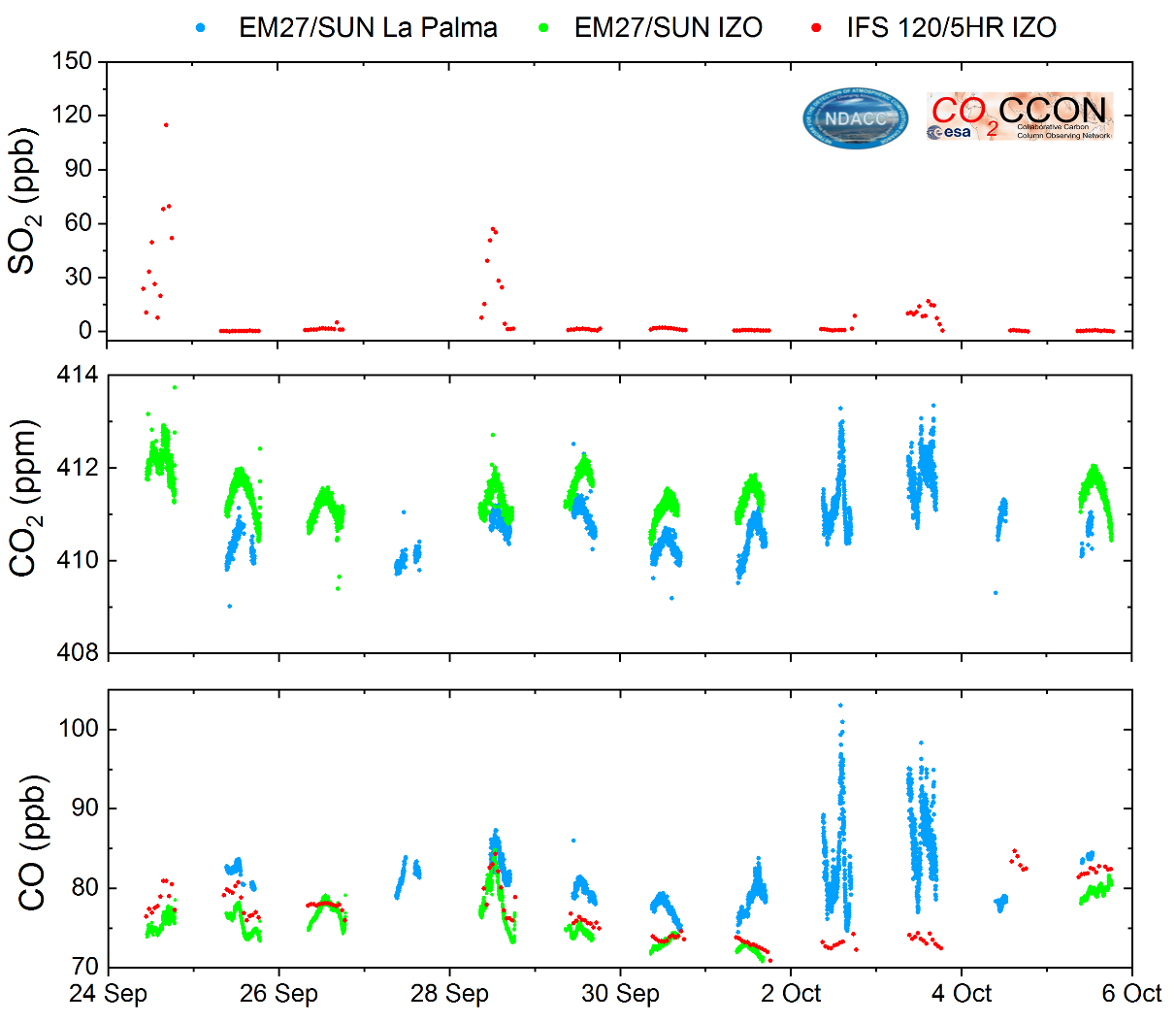 Figure 4. Concentrations of SO2, CO2 and CO measured by FTIR spectrometer IFS120/5HR and EM27/SUN spectrometers, belonging to the NDACC and COCCON networks respectively, installed at IZO and in the south of the island of La Palma (Fuencaliente) in the period from September 24 to October 6, 2021.

The great potential of column measurements for the surveillance and monitoring of atmospheric composition, and in particular, of eruptive processes, has been successfully demonstrated in the case of the volcano on La Palma and in other recent cases such as that of Etna (Italy) or Popocatepetl (Mexico) [6,7], showing important synergies and complementarity with surface measurements carried out in the context of the GAW-WMO programme and European reference infrastructures like ICOS (Integrated Carbon Observation System). Spain’s incorporation into ICOS in 2021, with the IZO atmospheric station and the CanOA-VOS oceanic station, both currently in their certification phase, represents a marked improvement in the atmospheric composition observation system at a national and European levels. In 2022, with the aim of increasing the observation network, the process of incorporating El Arenosillo atmospheric station in Huelva, National Institute of Aerospace Technology (INTA), into ICOS has begun.