Total ozone observations using the Brewer spectrometer are operational again at the Tamanrasset station (Algeria) and can now be viewed on the Eubrewnet network.

In 2006, the Global Atmosphere Monitoring Program (GAW, World Meteorological Organization -WMO-) station at Tamanrasset (Algeria) and the station at Izaña, managed by the Izaña Atmospheric Research Centre (IARC) from the State Meteorological Agency (AEMET) of Spain, initiated regular cooperation (Tamanrasset- Izana GAW “twinning”) for the development of the two stations. As a result of that collaboration and with funds from the Spanish Agency for International Development Cooperation (AECID), the Brewer #201 spectrometer was installed at the Tamanrasset station in October 2011. The instrument provides averages of total column ozone, UV spectral radiation and optical thickness of aerosols, complementing the measurements already existing at the station. Conditions at the Tamanrasset station, in the middle of the Sahara Desert, make it a unique point of measurement of the atmosphere and is often used in the validation of satellite observations and atmospheric dust models (Barcelona Dust Regional Center, https://dust.aemet.es/ and Copernicus, https://atmosphere.copernicus.eu/charts/cams/aerosol-forecasts)

The installation of the equipment was complemented by training of the personnel in courses held in Huelva (GAW-Sahara training course, June 2013) and in Santa Cruz de Tenerife (14th Brewer User Group Meeting). The Tamanrasset instrument has been part of the EUBREWNET network (http://www.eubrewnet.org/eubrewnet) since its inception. EUBREWNET is an operational network of Brewer spectrophotometers that emerged as a European project (EUBREWNET COST-Action 2014-2017, https://www.cost.eu/actions/ES1207/) but now encompasses more than 60 instruments from around the world.

The instrument, which was initially characterized by the RBCC-E at the Izaña observatory, has been calibrated regularly, every two years, during the calibration campaigns of the Regional Brewer calibration Center for Europe (RBCC-E., https://rbcce.aemet.es/) held in El Arenosillo-Huelva (Spain) and organized by the WMO. During the 2019 campaign, the instrument had to be repaired by IOS (International Ozone Services) technicians due to deterioration in the spectral response of the instrument. Although it was finally repaired and calibrated (Redondas 2021), it was never put into operation on its return to the Tamanrasset station.

For the equipment to return to operational status and, given the circumstances due to the Covid-19 pandemic, the WMO has set up a team trip to the IARC, where the RBCC-E staff repaired the instrument and subsequently organized training for the instrument operator, Sida Lamine Baika, who has recently been able to reinstall the equipment (Photo 1) and is providing its valuable observations to the EUBREWNET network (Photo 2). 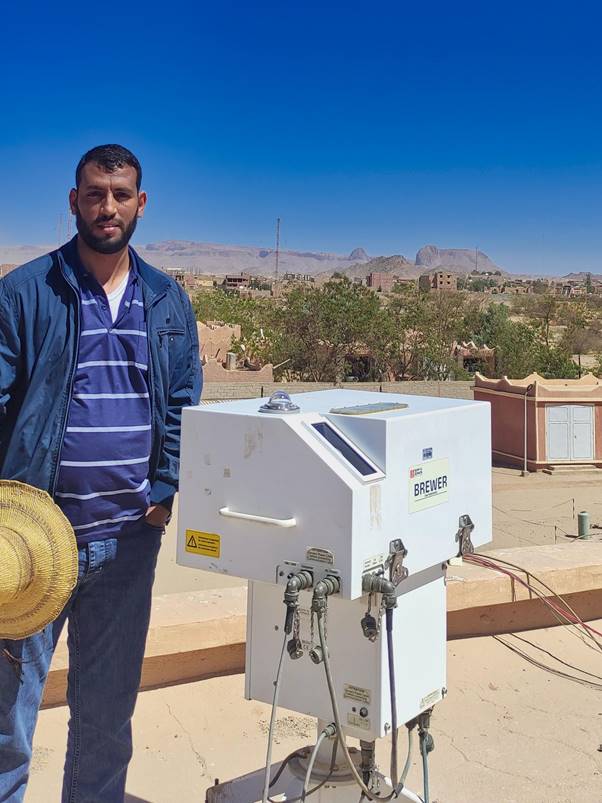 Photo 1:Sida Lamine Baika, Brewer operator at Tamanrasset with the Brewer #201. The Brewer was installed in October 2011 with the support of the Spanish Agency for International Development Cooperation (AECID). 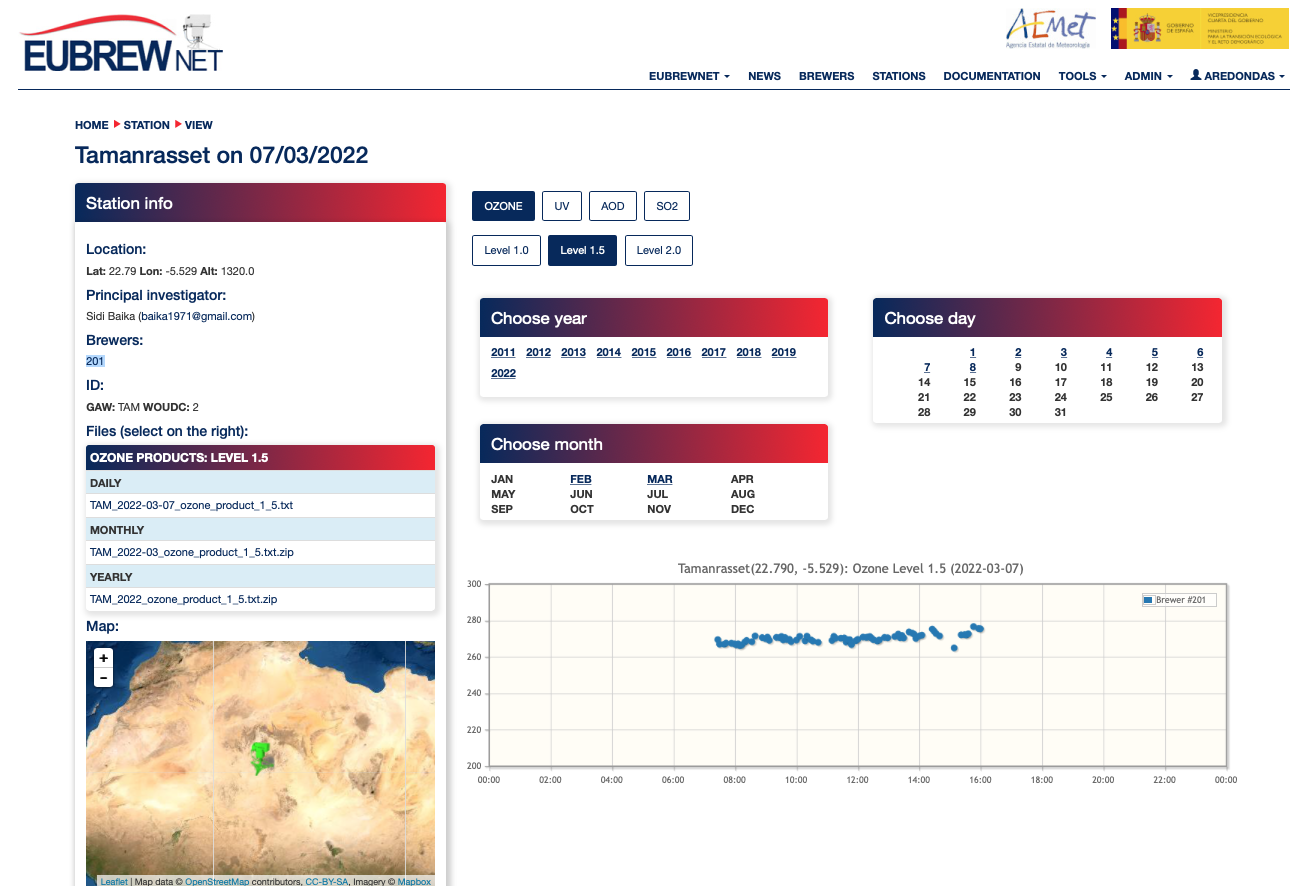 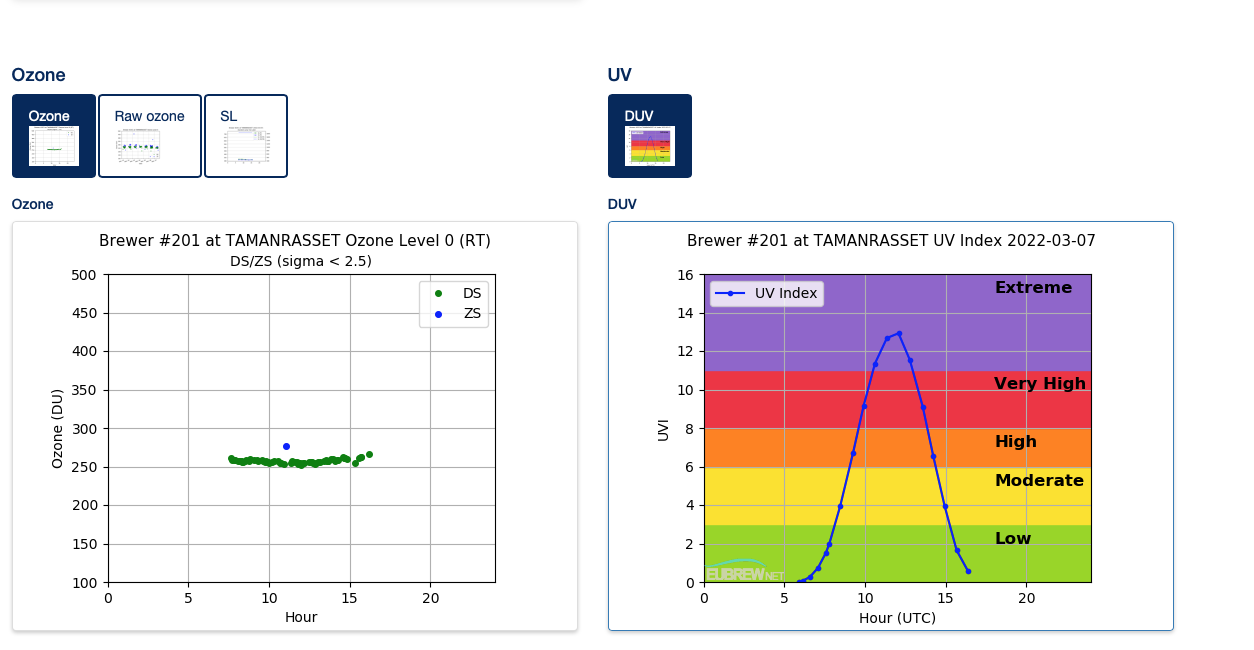