Long-term characterisation of the vertical structure of the Saharan Air Layer over the Canary Islands using lidar and radiosondes profiles: implications for radiative and cloud processes over the subtropical Atlantic Ocean, paper published in ACP

Every year, large-scale African dust outbreaks frequently pass over the Canary Islands (Spain). In this paper the seasonal evolution of atmospheric aerosol extinction and meteorological vertical profiles at Tenerife is described over the period 2007 – 2018 using long-term Micropulse Lidar (MPL-3) and radiosondes observations. These measurements are used to categorise the different patterns of dust transport over the subtropical North Atlantic and, for the first time, to robustly describe the dust vertical distribution in the Saharan Air Layer (SAL) over this region.

These authors have found that, under dust presence in summer (Summer-SAL scenario), the SAL appears as a well-stratified layer strongly affecting both the Marine Boundary Layer (MBL) and the free troposphere (FT) (Fig. 1a). In terms of humidity, the SAL appears relatively dry at lower levels but more humid at higher levels compared with clean FT conditions. Aerosol extinction coefficient (α) peaks at ∼ 2.5 km, but dust can be observed up to ∼ 6.0 km. This altitude has been defined as the SAL’s top or STI (SAL’s temperature inversion), according to the temperature inversion from thermodynamic soundings. The winter dust intrusions over the subtropical eastern North Atlantic region (Winter-SAL scenario) appears as a confined dust layer, compressed in the first 2 km (Fig. 1b). The most significant features of this layer in winter are the dry anomaly observed at lower levels, the α peak at ∼ 1.3 km height, and the STI observed at 2.3 km. Clean FT conditions were found above this level. 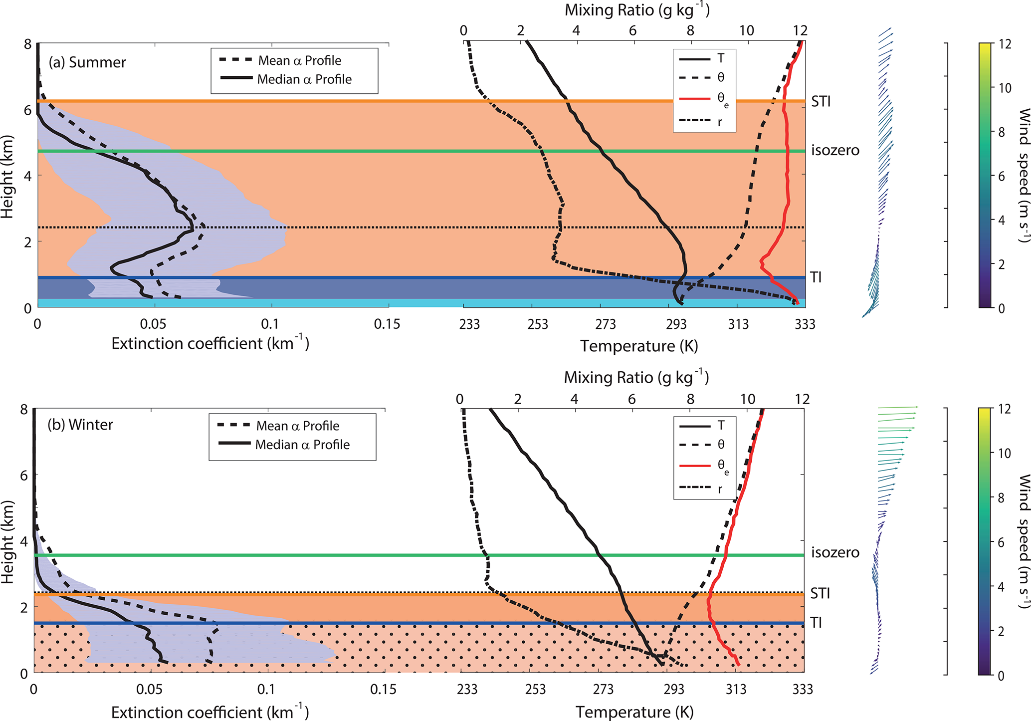 The SAL radiative impact of the Summer-SAL has been also studied by these authors. Their findings have revealed that both dust and water vapour play an important role in the radiative balance. A dominant dust-induced shortwave (SW) radiative warming in below the dust peak was observed but the combined effect of dust and water vapour appeared as a net SW warming within the SAL, as well as a strong cold anomaly due to longwave adiabatic cooling near the SAL’s top. In the case of the Winter-SAL, both dust and atmospheric water vapour impact heating in the atmospheric column. This is the case of the SW heating within the SAL (maximum near the water vapour mixing ratio peak), the dry anomaly at lower levels and the thermal cooling from the temperature inversion upwards.

Finally, a higher occurrence of moderately supercooled mid-level clouds near its top (5-7 km) under the presence of the summer-SAL could point to a possible impact of the SAL on heterogeneous ice nucleation.